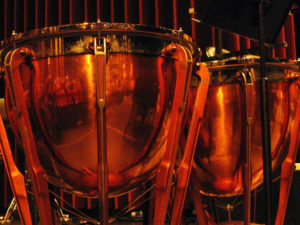 Up to this, our study of music in the Christian Era has traced the development of the art as fostered by the Christian Church, and mainly among the people of Southern Europe, in whom there was a strong admixture of the Latin blood and spirit. Before going farther on this line we will look into the record of music among the races of Northern Europe.

Music of the Gauls.—Roman writers give us some account of the character of the music of the Gauls, which differed much from the Greco-Latin songs. Roman historians make mention of the songs of the Gallic bards, who were poets and musicians as well, composing both religious hymns and songs in honor of their heroes. According to Diodorus of Sicily, the Gauls practiced the musical art long before the Christian Era, having regular schools for the instruction of the younger bards. The instrument used in accompanying their songs was a sort of lyre, judging from representations on some gold medals made in the time of Julius Cæsar. Charlemagne ordered a collection of the early Gallic songs to be made, but the work has not survived.

The Celtic Bards.—The Breton bards made use of an instrument the name of which is variously spelled Crouth, Crowd, Chrotta, Crwth, played with a bow, with an opening in the upper part through which the performer placed the left hand in order to press the strings, the number of which varied from three to six. The crouth of the Welsh bards differed in some respects from those that were made use of by the Breton bards. With them, however, a form of the harp became the national instrument. The early history of Celtic music in Wales in particular, is mingled with myth. We have only the names of bards, Fingal, Fergus and Ossian, no authentic music. What is of importance to us is the secular organization of the bards. One class included poets, historians and those skilled in the science of heraldry; another class comprehended musical bards, harp players bearing the title of doctors of music, players of the six stringed crouth and singers, who must have been skilled men, since nine years’ study was exacted of them.

Ireland.—The traditionary bard of Ireland is Fergus, whose songs were of war and heroes. When St. Patrick introduced Christianity into Ireland in the 5th century, learning and skill in the arts of poetry and music grew to be cultivated as extensively as in more favored lands. In the 10th century, the famous musician was the King O’Brien Boru, whose harp is still shown in the Dublin Museum. This has twenty-eight strings, and the sounding board, in which there are four holes, is very large at the base. After Ireland was conquered by the English its culture declined, owing to continuous wars and internal strife. 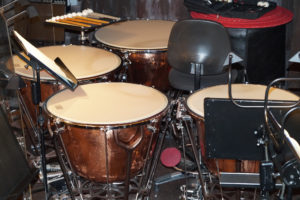 Scotland.—The music of the Scotch, like the other Celtic races just mentioned, is characteristic. Their harp was similar in form to the Irish; their favorite instrument was the bagpipe. King James I is credited with having done much to stimulate an interest in music among his subjects. Having been a captive in England for a period of eighteen years, he had acquired great skill in music, which was the solace of his weary hours. According to a contemporary historian, the king played a great many of the instruments in use in his day: the bagpipe, psaltery, organ, harp, lute, flute and dulcimer. The music of Scotland makes great use of the pentatonic scales, and it is likely that the original form of many of the old Scottish folk-melodies was pentatonic. A characteristic feature of Scottish music is the so-called “Scotch snap,” illustrated in the short notes in the familiar air “Comin’ Thro’ the Rye,”.

An instrument of so marked characteristics as those displayed by the bagpipe will naturally develop a characteristic style of music. The pipers gave extraordinary study to the mastery of their instrument and noted players acquired wonderful skill.

England.—Until the time of the conquest of England by William of Normandy (1066), music among the Anglo-Saxons was practiced by the scalds or bards, minstrels (also called gleemen), and the monks in the monasteries. Poetry and music were much encouraged by some of the kings and Alfred the Great was widely famed for his skill in playing the harp and as a singer. In the manuscripts belonging to these early days in England we read of such instruments as the psaltery, the rota, little harps of eleven strings, viols, called fiddles, citharas, cornets, trumpets, etc.

Scandinavia.—The Runic style of writing,—which has numerous analogies to the neumes,—used by the northern people, presents many difficulties in the matter of translation, so that we have little chance to form an opinion as to the early music of the Scandinavian races. They have their national poems, a presentation of their myths in the Edda, and the deeds of their great heroes in the Sagas, songs which inspired both poets and musicians, an office most generally found united in one person, called a scald, (equivalent to the Saxon bard). The sagas were sung or chanted by the scalds to the accompaniment of a small harp. In 1639 and again in 1734, in the duchy of Schleswig, horns of pure gold were found which had been used in the worship of Odin, covered with Runic inscriptions, which have not yet been satisfactorily deciphered. Other instruments belonging to this period that have been discovered and preserved in museums are bronze horns somewhat curious in shape, called lüdr. These instruments have been tested by experienced horn players and give forth a fine, resonant tone. Up to the present nothing has been discovered to indicate that the northern races had a system of musical notation; melodies were undoubtedly transmitted by oral communication.

Finland.—The people of Finland are intensely musical and have many beautiful folk-songs. Their national epic is called the “Kalevala,” and gives the history of the hero, Wainœmonien, god of music, who by the exercise of his art, became the master of the universe, analogous to the Greek myth of Orpheus. The Finnish bards used an instrument called Kantèle or Harpu, a sort of psaltery with five strings forming the first five notes of the minor scale, G fourth space, bass staff, to D above.